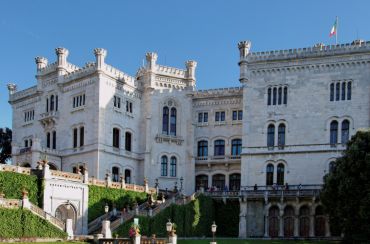 Miramare Castle was built in the 19th century near Trieste in the bay of Grignano. Once you get there, you understand why the Austrian Archduke Ferdinand Maximilian chose these places for the construction of his residence. At the request of the owner, the architect Carl Junker made the castle eclectic – it combines elements of Gothic and Renaissance architecture. The well-known Hoffmann masters were involved in the decoration of the interiors and the furniture.

Park Castello di Miramare deserves particular attention, covering an area of ​​22 hectares. It was created according to the idea of ​​Maximilian on a rocky coast, practically devoid of vegetation.

Archduke Maximilian bought a piece of land to build the castle in 1855. And a year later construction began. In 1860, the Archduke and his wife settled here.

In 1864, Maximilian received the title of Emperor of Mexico, and with his wife he left to go there, never seeing the end of work in the castle. The emperor did not return to his residence, because in three years he was killed. After the incident, his wife, Charlotte, had lost her sanity and spent the rest of her days in Belgium.

In consequence of these sad events, Castello di Miramare became simply one of the Habsburg residences, that famous people visited from time to time.

With the outbreak of the war in 1914, all furniture from the castle was transported to Vienna. After the First World War, Miramare Castle became the property of Italy and agreements were reached on returning everything back to normal.

In 1943 the Germans organized a school for officers in the castle. Later there were New Zealand, English and American military here.

Finally, after the castle was returned to the state ownership of Italy and restoration, in 1955 a museum was opened in it.

What to see while visiting the castle

While visiting the museum of Miramare Castle, you can plunge into the atmosphere of sophistication and luxury of the 19th century. Here, many items of interior and furniture of the imperial family were preserved. On the first floor of the castle there is Maximilian's bedroom and study. His wife's chambers are decorated with blue silk tapestries. The second floor of the castle was intended for guests. In addition to the guest rooms there is a throne room.

A separate landmark is the Miramare Park that surrounds the castle. Among the beautiful garden full of exotic plants, you can find natural grottoes, fountains and sculptures.

Not far from the Miramare Castle there is Castelletto. This miniature residence is located in a panoramic location overlooking the sea. On the other hand, it is adjoined by a park and a greenhouse. In Castelletto you can see pieces of furniture of the 19th century, numerous paintings and ornaments.

The stables, also built in the time of the Archduke, are located at a distance. Now they are used for temporary exhibitions.

You can get to the castle by going to Trieste Centrale railway station. Nearby there is a bus stop. Take bus № 6 or 36 to Miramare/Grignano (depending on the season).

Some regional trains stop at Miramare station, from where you can easily reach the castle in 15 minutes.

Ticket price: the total ticket price is 8 euros. There are discounts for EU citizens. However, you can enter the castle free of charge on the first Sunday of each month. And the entrance to the park is free.