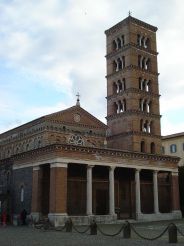 Not far from Rome in Grottaferrata there is the Greek Abbey of Saint Nilus (Abbazia Greca di San Nilo). It is also called Santa Maria de Grottaferrata. First of all, this place is remarkable for the fact that today it is the only monastery in Italy adhering to the Greek Byzantine rite. This is due to the fact that the founders of the abbey were monks of Greek origin. The monastery has existed for more than 1000 years and serves not only as a religious institution, but also as a center for the culture development.

History of the abbey

The history of the Abbey of Saint Nilus begins in the distant 1004, when Saint Nilus di Rossano, accompanied by his disciples, went in search of a place to spend the last days of his life. Before this, the monk was in the monastery of Valleluce. On the way, the travelers found the remains of a large villa on the hills of the city of Tusculum. According to the attribution, the Madonna appeared in front of Nilus and his disciple Bartholomew. After this vision, it was decided to build a monastery here. Construction began after Count Gregorio di Tuscolo presented the villa to St. Nilus, and was conducted on the basis of an existing building. The works on the construction of the monastery lasted for 20 years. And in 1024, Pope John XIX consecrated it.

Further fate was not simple, as the monastery was often in the center of conflicts between representatives of church authority. So in 1163 the monks left the monastery due to the fact that it was looted because of the confrontation between Rome and Tusculum. Having found refuge in the Benedictine Monastery of Subiaco, they could return only in 1191 before Tusculum was destroyed by the Romans.

The lost possessions were returned to the monastery thanks to the efforts of Pietro Vitali, who was appointed rector in 1432.

The building was constantly being completed, the interior was changing. The defensive towers, residential buildings were built, the square in front of the church was created.

In 2004, the Greek Abbey of Saint Nilus celebrated its millennium.

What can you see in the Abbey

The territory of the monastery is very large and includes not one interesting place. Here you can visit:

From Rome to Grottaferrata you can get by train or bus. But in the very town you will have to move on foot.