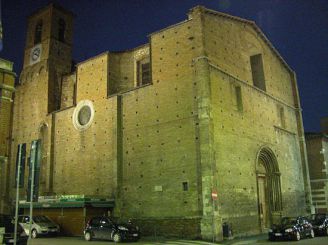 Church of St Anthony in Teramo was built in the 13th century (1227) and was the property of the Franciscan monastery. At first it was consecrated in honor of the founder of the order – Francis of Assisi, and from the middle of the 19th century the temple began to bear the name of Antony of Padua, who is considered to be the patron of the students. In addition to the church, the monastery had cells and a refectory. During all of its existence, the church has changed its appearance several times: a tall bell tower was built in the early 14th century, and several years later, in 1327, the size of the temple was increased.

The large-scale reconstruction of the church took place in 1557 – it acquired the features of the popular at that time Baroque style.

The Church of St Anthony in Teramo is divided into the Church of St. Francis and the Chapel of St. Anthony. The first consists of chapels, and a statue of the Virgin Mary stands under the apse. Above it you can see the image of the coronation of the Virgin Mary. Remarkable paintings on biblical themes are the decorations of the chapel. Another gem is the organ of the 19th century.

The Church of St Anthony is located on Corso de Michetti. Nearby there is another architectural gem of the city – the Cathedral of Santa Maria Assunta.