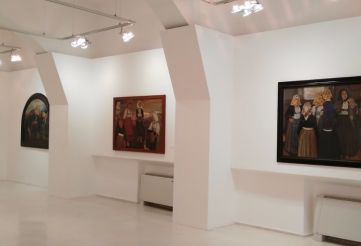 The Francesco Ciusa Museum in Nuoro is dedicated to the great artist, the founder of the revived sculpture tradition of Sardinia. Francesco was born in 1883 and, being a beginner sculptor, managed to get an authoritative award in Venice.

Exhibits of the Ciusa Museum

The Francesco Ciusa Museum consists of six rooms where visitors can get acquainted with more than sixty works of the sculptor. The works are made out of plaster, clay and marble paste, accompanied by author's sketches and documents from the archives. In the halls you can see:

Exposition in the museum is sorted not in chronological order, but with the degree of increasing emotions. The whole world of Ciusa's works is imbued with the power of primal senses, passion and experience of the ancient spirit of Barbagia.

The history of pottery in Sardinia began in pre-Antique times. Items of household utensils made out of clay are found in archeological excavations in the first settlements of people on the island. Later, the development of pottery was continued by Sards, Phoenicians and Carthaginians, who came to the island and brought their knowledge of working with clay.

The statute of Oristano Guild of potters was the first historical document on the manufacture of ceramic products in Sardinia. It was prohibited to deviate from the technology of making utensils and change the shape of the products. The instruction served as a significant factor in the gap between the Sardinian masters European colleagues, whose dishes became more and more refined and elegant. Only in the middle of the 19th century this ban was lifted.

Thanks to artists such as Francesco Ciusa and their progress in the manufacture of ceramic products it became possible to catch up with European technology in Sardinia and enrich the general Italian culture with new techniques in the creation of ceramics. It was based on modern innovative approaches and ancient traditions of the potters of Sardinia.