Fountain of the Tritons, Trieste 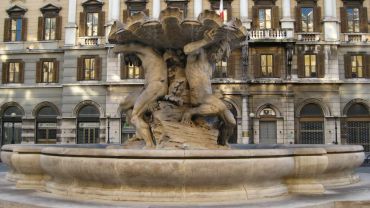 Fountain of the Tritons in Trieste is located on Piazza Vittorio Veneto, in front of the post office. It remotely resembles an earlier fountain in Rome. In the middle of the pool there are huge figures: two Tritons and Nereid. They bent under a heavy load, holding a giant shell, from which streams of water flow. The statues are refined to the smallest detail. Nereid rests on the pedestal with one hand, throwing hair from her face with the other. One of the tritons holds her hand, gazing into the opposite direction. The other is detached, he looks down, concentrating on his task.

History of the Fountain of the Tritons

The fountain was built by the order of the city authorities for the anniversary of the Emperor Franz Joseph I. The monument of the Tyrolean master Franz Schranz was installed on the square in 1897.

Later the fountain was expanded, adding to it a modern canal with illumination, thanks to which water can be painted in various colors.

The fountain is in a 5 minutes walk from the Trieste Centrale railway station. Walking a little further, you can visit another unusual monument – Fontana dei Quattro Continenti.