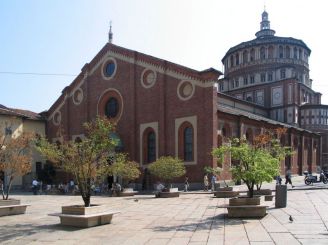 Santa Maria delle Grazie is one of the main attractions of Milan. It is one of the churches of the Dominican monastery. Every year, millions of travelers from all over the world come to look at the majestic structure. Of course, the Last Supper – fresco by da Vinci is the highlight of the church, and it is kept inside. In 1980, UNESCO included Santa Maria delle Grazie and the monastery complex to the World Heritage List.

The construction of the church of Santa Maria delle Grazie in Milan is associated with the Count Gaspare Vimercati, who in 1460 gave the Dominicans a chapel with a fresco depicting Our Lady. The church and the monastery were built later. The construction works, led by Guiniforte Solari, began in 1463 and ended in 6 years.

The building also survived the reconstruction under the Bramante, who expanded it, decorated with large semicircular apses, erected a majestic dome, based on rectangular columns, and a light, not characteristic for that time, spacious patio.

Along the side walls of the temple there are 7 square chapels built by Solari. The last chapel, placed on the left, is dedicated to Our Lady of Graces. After the construction of the church was completed, the influential families of Milan started rivalry for patronage over the chapels, in order to use them later as family tombs. Chapels were decorated with works of famous artists Antonello da Messina and Gaudenzio Ferrari.

In the refectory of the church of Santa Maria delle Grazie there is the creation of the famous Milan artist Donato Montorfano – Crucifixion, and the fresco the Last Supper by Leonardo da Vinci. The latter is considered to be the only monumental work of the artist that survived to this day. Fresco, as well as other murals in the church, was commissioned by the patron of art – Lodovico il Moro. The fresco shows the moment when Jesus informs the apostles that one of them will betray him. The uniqueness of the Last Supper is also in the emotional diversity of the characters. Researchers argue that none other painting of the Last Supper does not have such a subtle drawing of details. One of the most difficult moments in creating a masterpiece for da Vinci was the selection of images of Jesus and Judas.

During the Second World War, the church and the monastery were partially destroyed, the refectory was completely destroyed, but the wall with the Last Supper survived. Until now, it is a symbol of the profound faith of the Catholics of Milan.

Admission: 10 euros. A ticket for one person with a guided tour is 3.5 euros (plus an entrance ticket). The tour can hold no more than 30 people, and it lasts for 15 minutes. On the first Sunday of the month the entrance is free, the reservation is obligatory.