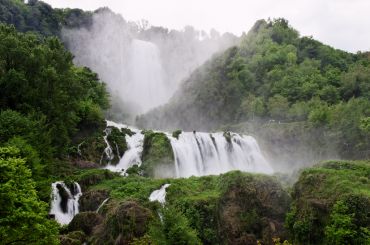 The marble waterfall is located in 7 km from Umbrian town of Terni and is a majestic structure created by the ancient Romans. For many centuries, the beauty of the Marmore's Falls was a source of delight for travelers coming from all over the world to admire the wonderful cascade. The Marmore's Falls in Terni is the highest cascade in the world, created by human hands. Its height is 165 m. The waterfall consists of three cascades. In 1929, a unique hydroelectric power station was built near the Marmore's Falls. For tourists it is turned on according to the schedule. Water cascades in the Nera Gorges, along which there is the main route for tourists. There are two entrances to the Falls from the gorge – to the upper and lower observation platforms.

Traveling along the Nera Gorges, tourists can visit:

The marble waterfall is located on the Velino River and was built to drain water from the muddy area. Residents of the neighborhood suffered from malaria, and in the 3rd century BC, the Roman consul Manius Curius Dentatus issued a decree on draining the marshes and draining water into the Nera River. For many centuries, the waterfall fulfilled its mission, it was repeatedly restored in the Middle Ages, as the water supply system deteriorated and the area became marshy again.

For three centuries, the Roman pontiffs were engaged in the reconstruction of the waterfall, created new canals, and only in the late 18th century the architect Andrea Vichi, according to Pius VI's decree, reconstructed the lower part of the cascade. In this form, travelers can observe the Marmore's Falls today.

Basically, the water from the canal in the upper part of the waterfall is fed to the existing hydroelectric power station, turning the Cascata delle Marmore water stream into a weak stream. Water comes to the waterfall according to the established schedule.

At first, visitors hear a loud beep, like a factory whistle. Then the dam locks open, and the stream turns into a roaring stream, and the water crashes down, crashing against the rocks of the cascades and forming a magical haze with numerous rainbows. This moment attracts numerous visitors and they enjoy watching an incredible water extravaganza from the viewing platforms.

How to get to the waterfall

You can get to the Marmore's Falls from the city of Terni by public transport from the local bus station to the park territory. For travelers from Rome – you can reach Terni, by the high-speed train from Termini station, which departs every hour.

There is the fee for the entrance to the park, the approximate price is 10 euros.