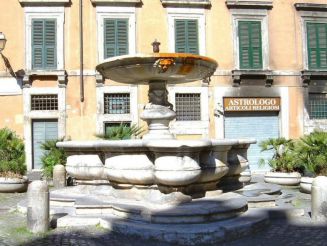 In the central part of the Jewish Quarter on Piazza delle Cinque Scole in Rome, there is a small fountain. Originally it was built on another square – Giudia – for supplying drinking water to the Jewish ghetto at the end of the 16th century. In the 20th century, the fountain was moved to its current location. It has an old name – Fontana del Pianto, or the Fountain of Tears. It was designed by the famous sculptor and architect Giacomo della Porta.

White marble, which was used in the construction, was once part of the ancient temple dedicated to the god of abundance – Serapis. The fountain was built in the traditional 16th century style. in the upper part there is a round bowl. Around the perimeter of the bowl, through the heads of the gorgon, water flows into the lower bath, similar to connected flower vases.

Piazza delle Cinque Scole is situated near the embankment of the Tiber River, near the Tiber island. You can get here on the city tram № 8 to the Arenula stop.