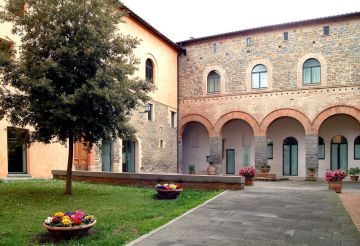 Ceramics Museum (Museo Regionale della Ceramica), located in Deruta, could not be situated in a more suitable place. From ancient times clay was extracted in this small town of the province of Umbria. And, of course, a whole culture based on the production and painting of ceramic products developed here. The museum collected exhibits representing the movements and styles of different eras, so that visitors can trace the history of the development of the art of ceramics in this particular area of ​​Italy.

The Ceramics Museum in Deruta is the oldest museum dedicated to Italian ceramics. It was founded in 1898 and at the very beginning of its existence it was called "Art Museum for Majolica Workers". It is interesting that the document proving the creation of the museum is still kept in the side altar of the church of San Francesco.

Originally, the museum's collection owned about 180 exhibits, most of which were given to the museum as a result of donations. In the future, the number of exhibited items increased tenfold due to receipts from factories and private collections.

Collections of the Ceramics Museum

The history of ceramics art in Deruta can be studied thanks to 6 thousand exhibits. All of them are arranged in such a way that visitors can follow the path of development from the Middle Ages to the 20th century.

In the museum of ceramics, visitors can observe:

You can reach the museum by buses E007 and E029, and get to the Deruta Centro stop.

Opening hours: the Ceramics Museum in Deruta is open for visits every day except for holidays.