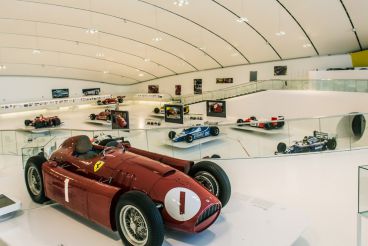 Ferrari Museum (Museo Enzo Ferrari) is one of the youngest in Modena. But at the same time it is the very product of high technologies, art of architecture and design. Built in the birthplace of the founder of the legendary brand, the museum tells its story. It leads the visitor to the roots of creating the most famous car brand in the world, and also offering to see some exclusive examples of these cars.

In 2003 the organization Fondazione Casa Natale di Enzo Ferrari was founded. It aims not only to create the Enzo Ferrari Museum, but also to promote the car traditions of the province of Modena in the world. The existing spaces of the former auto repair shop, where Enzo was born, as well as the factory premises were reconstructed. The project was created by the famous Czech architect Jan Kaplicky. In 2009, he died, and his assistant, Italian designer Andrea Morgante, continued the work. The work cost the creators an astronomical amount – 18 million euros.

The museum was opened for visitors on March 10, 2012. It is built in accordance with environmental requirements, has geothermal heating and water recycling systems, as well as solar panels. Despite the proximity of the station, the museum is quiet thanks to modern sound barriers. In January-February 2014, the museum was closed for a small reorganization of exhibition spaces.

Architecture and exposition of the museum

The museum is ultramodern both outside and inside. A huge structure rises among the factory quarters, the yellow roof of which is made in the form of a Ferrari cowl 1950-1960. And the yellow color is selected in accordance with the background of the brand emblem – the prancing horse. By the way, yellow is the color of the city of Modena. The profile of the foundation of the building resembles the shape of the signature of Enzo Ferrari. Inside of the exhibition space, with a total area of ​​5000 square meters, there are no architectural barriers. The walls and ceiling here are undulating and neutral white, creating good lighting.

The main pavilion occupies half of all spaces. An exciting audiovisual show telling the story of the founder of Ferrari is here. There is a permanent exhibition of the most important and iconic models of the brand Ferrari from all the years of the brand's existence. Amazing cars are placed at a height of 0.5 meters on mobile platforms, allowing you to view the car from all sides.

Part of the museum is also a restored workshop where the father of Enzo Ferrari worked. The museum has its own documentation center, a conference room and a cinema hall, a shop, a café and a restaurant.

The museum is located slightly north of the central part of Modena, on the Via Paolo Ferrari, 85. Next to it there are the railway station and the ducal park, and 1 km to the south there is the magnificent Figurine Museum. In 3 minutes walk there is a bus stop Ferrari Bivio Soli (routes 9, 14).