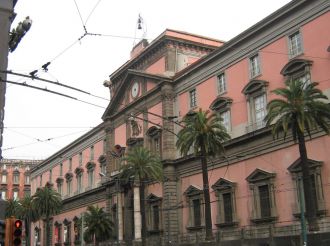 The National Archaeological Museum of Naples is one of the largest in Italy. Collections of the museum are located in the halls of the building created in 1615. Not only the valuable exhibits of the museum, but the building itself is of great interest to visitors. Here you will see hundreds of thousands of artifacts, from prehistoric times to late antiquity, as well as historical items from other periods.  The collection found during the excavations of Pompeii and Herculaneum is of the main interest.

History of the Archaeological Museum in Naples

The Naples Museum of Archeology is located in the Palazzo degli Studi, built in 1615 by the architect Giulio Cesare Fontana. Until 1777, classes of the University of Naples were held in the walls of the palazzo. By order of King Ferdinand IV, the building was reconstructed and redeveloped to meet the needs of the Royal Library and Bourbon Museum. The architect Ferdinando Fuga worked on the project. From this moment we count the beginning of the history of the Museum of Archeology.

In the subsequent years, the building of the museum was rebuilt. Thus, the second floor was built above the right and left wings. Ferdinand IV decided to unite in one place a collection of valuable books, as well as a rich collection of antiquities belonging to different periods, including the subjects of the Farnese family, as well as objects found during excavations of ancient cities in the vicinity of the volcano Vesuvius, which, incidentally, is still active. Collections of the museum were constantly replenished with various exhibits, for example, objects of the personal collection of Carolina Bonaparte.

After Risorgimento, an association of Italy in 1860, the museum became the property of the state and was named the National Museum. In the late 19th – early 20th century, the museum exhibits were reorganized by archaeologist Giuseppe Fiorelli according to the typological feature. So, over time the picture gallery moved to the Museum of Capodimonte. Today the museum stores exhibits of archaeological value.

Exhibits of the Museum

The exhibits of the archaeological museum in Naples are divided into sections, according to the historical era or exhibited subjects.