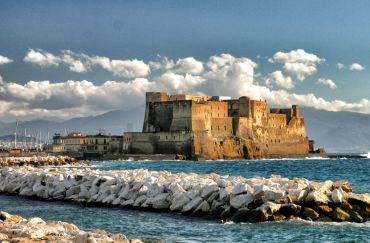 Set on the island of Megaride, a big fortress connected by a mound to Naples is a famous Castel dell'Ovo. Its walls have witnessed many epochs since they were erected as far back as 1139. Castel dell'Ovo in Naples is rightly hailed as the oldest fortification in Italy. It is likely to be the principal reason for its popularity among tourists. Besides excursions, the fortress hosts various events. The top of the medieval walls affords a beautiful view over the city, the Tyrrhenian Sea and Vesuvius.

Origin of the castle’s name

Castel dell'Ovo may be translated as “Egg Castle”. The shape of it is really reminiscent of an egg. Although, according to another version the castle owes its name to the Roman poet Virgil. As legend has it, he hid a magic egg inside its walls, and the castle is safe as long as the egg is unscathed.

In the 1st century BC, the Roman patrician Lucullus built a villa on the island where nowadays the castle is situated. Later, during the reign of emperor Valentinian III the fortification was constructed to fight off sea attacks. It was inhabited solely by monks until the 9th century when the fortification was pulled down to prevent it from being seized by Saracens. The event marked the starting point for the history of the fortress as we know it today. The modern fortress was built by Roger of Sicily in 1139.

A hundred years after, the court of Charles I of Anjou moved to the new castle Castel Nuovo, so Castel dell'Ovo lost its strategic function. The fortress outlasted three royal dynasties, an earthquake, as well as Spanish and French artillery shelling. The main part of the fortress, nevertheless, is well preserved to the present day.

Worth seeing in the castle:

Ghostly legends of the castle

Dell'Ovo Castle is awash with legends. It is haunted as any other old castle. Tourists are frightened with the stories about the ghost of a headless Saracen, an enemy spy that got inside the fortification and was beheaded.

Castel dell'Ovo sits not far from Plebiscito square. Nearby there are several other main attractions of Naples such as Castel Sant'Elmo, Castel Nuovo and the Royal Palace. Take the bus С25 to Via Partenope stop, to get to the castle.